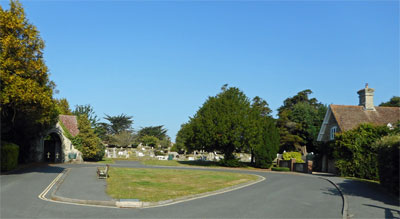 A Burial Board for Shanklin, Isle of Wight was established in 1876 following a notice issued by the lord of Shanklin Manor (Mr. Popham White) and the Rev. Southouse that no further burials would be allowed in the old Shanklin churchyard except for deaths within the small area of St. John's.

The Burial Board established Shanklin Cemetery, on Cemetery Road, off Green Lane at Lake, on land gifted by Col. Francis Henry Atherley J.P. of Landguard Manor.

A number of victims of ship wrecks on the local coast are buried in the Cemetery.

Retrieved from ‘https://www.wightpedia.org.uk/index.php?title=Shanklin_Cemetery&oldid=2872’
Categories:
Cookies help us deliver our services. By continuing to use this site, you are consenting to our use of these cookies.