The company was a subsidiary of the Brading Harbour Improvement and Railway Company; a company funded by the Liberator Building Society and set up to reclaim Brading Haven by building the Bembridge embankment and the railway to Bembridge. When the Liberator Building Society collapsed in 1892 as a result of fraud by Jabez Spence Balfour, both companies fell into receivership.

It’s unclear how far the gas company had progressed by 1898, the OS map of that year shows a small gas works to the west of North Quay; however the 1903 references below suggests they may not have got very far in distributing any gas produced. (Typically, streets were lit by gas before it was distributed to private dwellings and the first mention of street lighting for St. Helen's was 1903.)

In 1898 IW Rural District Council were considering the purchase of the Brading Harbour Gas (and Water) Works from the Official Receiver, however it appears they did not have the required authority.

In September 1902 it was reported (IWO 27 Sep 1902) that a syndicate had purchased the gas works and did ‘not intend that the village shall long remain unlighted by the modern illuminant.’ And by March 1903, the Local Board had quotes for both Gas and Electric (from Ryde Electricity Company) to consider – those choose the £32 charge for gas lighting.

With The Brading Harbour District Gas Order 1903, the new owners seemed to have got into action, in May 1903 the IW Observer reported that ‘a large consignment of gas pipes has arrived .. to be laid down in the districts of Bembridge and St. Helen’s’.

At the start of 1923, the Brading Harbour and District Company merged with the Ryde Gas-light Company.

By 1946, the OS map shows two gas holders to the west of the original single, small gasometer. 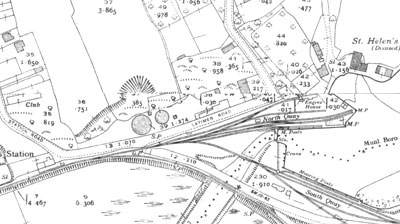 The works closed in 1957 when a new Gas Works was built at Kingston, East Cowes to supply the whole island.

The gasometer continued to be used at the site, to locally store gas, until the island was converted to Natural Gas (North Sea) in the 1970’s and the gas holders dismantled.

Today (2018) the site has been redeveloped as Dove Close.