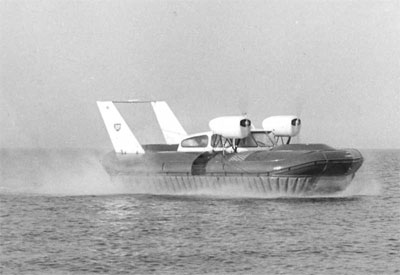 After Britten Norman encountered financial difficulties in 1971, the Cusioncraft subsidiary was sold to the Cowes based British Hovercraft Corporation in 1972.

The craft produced by Britten Norman/Cushioncraft were:
CC1 - 1960 - A three person test craft.
CC2 - 1961 - An 11 passenger craft, originally designed without a skirt and using defected air underneath to provide propulsion, later a skirt was added also two external propellers driven by Rolls Royce aero-engines to provide propulsion. Three were produced and were largely used for various tests.
CC4 - - A six seater developed with the cooperation of Hovercraft Development Ltd (Hythe). It was the first of these craft to use a unusual configuration of vertically mounted centrifugal fans to provide both lift and propulsion. The craft ended up with NPL as a test vehicle at Hythe and was re-identified HU-4.
CC5 - March 1966 - A 6 to 8 seater development of the CC4 (again using the vertically mounted centrifugal fans to provide both lift and propulsion). Later in 1966 (October) the craft turned over while testing in Priory Bay and was a total loss.
CC6 - Was a conception only of a small, vehicle carrying craft using the vertical centrifugal fans for lift and propulsion.
CC7 - 1967 - A ten person craft (a stretched, 18 person version was proposed at one time) using just two vertically mounted centrifugal fans powered by a turbine. A number were sold around the world. However, the takeover by BHC ended any further developments.

Another resource:
More details of Cushioncraft and their craft