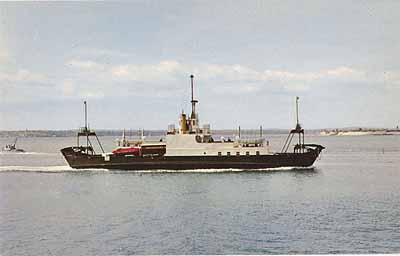 MV Fishbourne Car Ferry on the Yarmouth - Lymington route
MV Fishbourne was a British Rail (later WightLink) Ro-Ro car ferry built by Philips of Dartmouth. Originally used on the Fishbourne - Portsmouth route, it was later switched to the Yarmouth - Lymington route.
It was withdrawn from service and sold in 1983, it ended up in Cyprus renamed as 'Kibris I'; in 1985 it suffered engine failure and after being driven ashore, it broke up and sank.