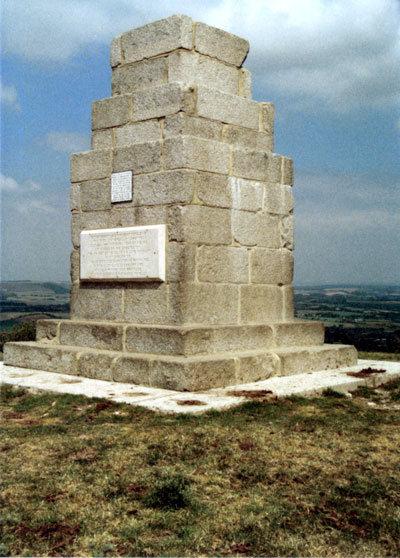 The Worsley Obelisk stands on Stenbury Down, above Appuldurcombe House, near Wroxall, Isle of Wight. The obelisk was erected in 1774 by Sir Richard Worsley in memory of his ancestor, Sir Robert Worsley who died 29th July 1747.

In 1831 the monument was struck by lightning and partially demolished.

It remained in that state until 1983 when it was restored, although not to its original height, by General Sir Richard Worsley with the assistance of the Isle of Wight County Council and the people of Godshill Parish.

Two plaques are attached to the monument:

Retrieved from ‘https://www.wightpedia.org.uk/index.php?title=Worsley_Obelisk_(The),_Wroxall_-_Godshill&oldid=2645’
Categories:
Cookies help us deliver our services. By continuing to use this site, you are consenting to our use of these cookies.