In 1878, the naval training ship HMS Eurydice was wreaked in Sandown Bay with the loss of 300 lives, this prompted a need for a lifeboat.

A lifeboat provided by the Isle of Wight Sunday School Lifeboat Fund was put on station in 1884. 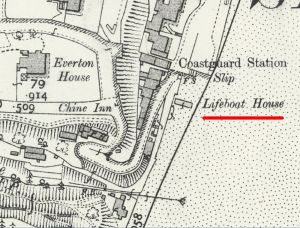 A wooden boathouse was built at the bottom of Chine Hill to house the 28ft, Lamb and White lifeboat built in 1868 by Whites of East Cowes and transferred from Totland.

During a storm in November 1916 the boat was washed out of the boathouse and wreaked[1]. The boat was not replaced and the station closed.

The Sandown & Shanklin Independent Lifeboat was formed in 1972 and operates inshore lifeboats from Sandown Esplanade.

Retrieved from ‘https://www.wightpedia.org.uk/index.php?title=Shanklin_Lifeboat&oldid=2999’
Categories:
Cookies help us deliver our services. By continuing to use this site, you are consenting to our use of these cookies.