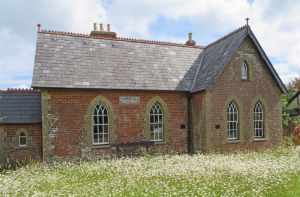 The Thorley School building is on the corner of Thorley Street (B3401) and Tattels Lane, Isle of Wight.

A public meeting in late November, at which the vicar doesn’t seem to have attended, elected new school managers, including two people who were involved with the management of the Yarmouth Schools. One problem with finding Thorley people seems to have been the number of people who regularly attended Sunday services at St. Swithin's Church[4].

The Thorley School re-opened in January 1903 with a new schoolmistress[5].

In 1911 the school is referred to as an Elementary School (mixed) with average attendance of 50 children[6].

In 1943 the Director of Education reported that there were only 16 scholars at Thorley Junior School and recommended it closure[7]. By November 1943 the number of scholars had fallen to 9 and the Education Committee agreed that the school should close with the children transferred to Yarmouth and Shalfleet (Ningwood)[8].

On a 1975 map, the building is shown as the Heytesbury Church Hall.

Now (2021) the building is a private residence.

Retrieved from ‘https://www.wightpedia.org.uk/index.php?title=Thorley_Schools&oldid=2587’
Categories:
Cookies help us deliver our services. By continuing to use this site, you are consenting to our use of these cookies.