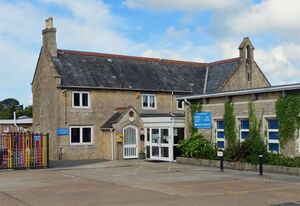 A school at Shalfleet, Isle of Wight dates from 1849 when a National School was established on the site. The site was conveyed to the minister and churchwarden of the Parish of Shalfleet by Mrs. Nash and others in 1849. Mrs. Nash, the widow of John Nash, the architect, having moved to Shalfleet following the death of her husband[1]

Over the years the school has been referred to as both 'Ningwood School' (as it is located in Ningwood village) and 'Shafleet School'; there wasn't a change of name, just different names used at different times.

In 1894 there were deficits on the school and building accounts, and there was further building work proposed. Discussions were carried out whether to carry on as a voluntary school or to bring in a School Board[3]. The fact that in 1898[2] the school was still a National school, with average attendance 68, indicates that the voluntary status, attached to Shalfleet church continued.

In 1949 the Calbourne and Locks Green Schools closed and the children transferred to the Shalfleet school[1].

Over the years the school has been extended.

Today (2021) the Shalfleet Church of England Primary School is part of ‘The Federation of the Church Schools of Shalfleet and Yarmouth’.

Retrieved from ‘https://www.wightpedia.org.uk/index.php?title=Shalfleet_School&oldid=2491’
Categories:
Cookies help us deliver our services. By continuing to use this site, you are consenting to our use of these cookies.