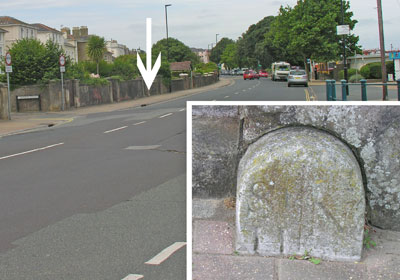 From early times, the boundary between the parishes of St Helens and Newchurch (which pre-1866 included Ryde) was marked by Monkton Mead which flows alongside the railway track from Smallbrook north to a point where they both disappear into separate tunnels under Ryde Esplanade.

Easily overlooked on Ryde Esplanade, almost opposite Cornwall slipway is one of the old boundary stones up against a gate pillar and sunken into the pavement. On the left is marked St H, and on the right N - thus marking the boundary between the two old parishes.

Two streets back, in Simeon Street, is another marker - possible these were the only two markers needed as elsewhere Monkton Mead flows on the surface.

Retrieved from ‘https://www.wightpedia.org.uk/index.php?title=Parish_Boundary_marker_for_St_Helens_and_Newchurch&oldid=1978’
Categories:
Cookies help us deliver our services. By continuing to use this site, you are consenting to our use of these cookies.