An Endowed School, for boys and girls, at Newchurch, Isle of Wight is shown on the 1882 OS map at Langbridge. No evidence remains of the building today other than the name of the lane, ‘Old School Lane’ (opposite Bartletts Service Station). This school appears to date from the late 18th century; a headstone in the churchyard refers to a schoolmaster of this school – Richard Forward, who died at Langbridge School House. 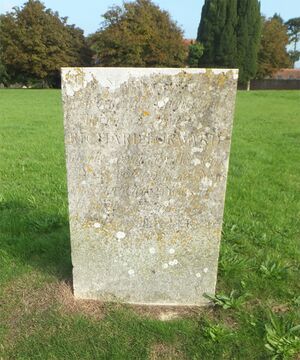 Richard Forward's headstone, Newchurch Churchyard
This Stone is erected by
Voluntary contributions to the
Memory of the late
RICHARD FORWARD
who filled the situation of Vestry Clerk
51 Years, Parish Schoolmaster 53 Years
and Church Clerk 24 Years for
this Parish and terminated his
Earthly career JULY 25 1826
AGED 76 Years

In yonder sacred pile his voice was wont to sound,
And now his body rests within this hallowed ground;
He taught the peasant boy to read and use the pen,
His Earthly toils are o’er; He’s cried his last AMEN.

A School Board was formed in 1871 after a number of meetings of the parishioners in the Langbridge schoolroom. The School Board would cover both Newchurch and Wroxall[1].

New ‘Board Schools’ were built in both Newchurch and Wroxall and were opened on the same day in 1873 (the foundation stone at Newchurch bears the date 1870)[2]. The Newchurch school was for 110 boys and girls and 53 infants; Wroxall was for 250 children.

In 1911 the school was an Elementary School under the Isle of Wight County Educational Committee.

Retrieved from ‘https://www.wightpedia.org.uk/index.php?title=Newchurch_Schools&oldid=2489’
Categories:
Cookies help us deliver our services. By continuing to use this site, you are consenting to our use of these cookies.