Michal Morey of Arreton was born in 1672, in 1737 he was found guilt at Winchester of murdering his grandson James Dove and was executed by hanging.

In 1736 Michal Morey was living at Sullens[1], in the parish of Arreton, with his grandson, James Dove. James's mother (Morey's daughter, Mary) had died shortly after James's birth - Thomas Dove, James's father, had remarried and had left James with his father-in-law.

For some reason July 1736, probably because James, then about 14 years old, disobeyed him, Morey took him out into the woods and killed him with a billhook. Morey then cut off the head, and put the body, with the billhook, in two bags and left them in a neighbouring wood. Following the disappearance of Dove, the search was on for Morey and he was found after a period and couldn't explain the disappearance of Dove. So Morey was charged with murder and moved to Winchester Prison for his trial although Dove's body had not been found. The bags containing Dove's body were found in October 1736.

On 19 March 1737 Morey stood trail at Winchester for the murder of his grandson. He was found guilty and sentenced to death by hanging, which duly followed at Winchester. 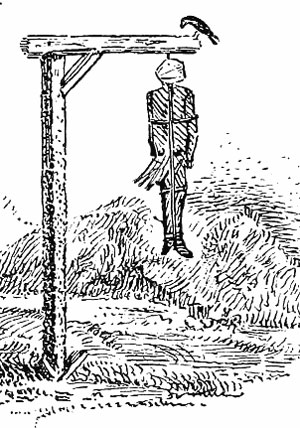 Morey's dead body was returned to the Parish of Arreton where it was hung in chains on a gibbet erected on the Bronze Age barrow on the Downs road, near the Hare and Hounds Public House. During the summer of 1737 travellers on the Newport to Brading road would probably have encountered flocks of rooks and ravens around the gibbet picking at Morey's body.

The gibbet used to hand Morey in his chains is reputed to be a roof beam in the Hare and Hounds, there also is his reputed skull - although neither claim can be substantiated.

The above details have been extracted from 'For Rooks and Ravens' by Kenneth S. Phillips 1981 ISBN 0-906328-14-4 - In the book Kenneth Phillips debunks a number of local folklore 'legends' about Michal Morey which I haven't touched on here. If you can obtain the book, it's well worth a read.

Retrieved from ‘https://www.wightpedia.org.uk/index.php?title=Michal_Morey_of_Arreton_-_murderer&oldid=2254’
Category:
Cookies help us deliver our services. By continuing to use this site, you are consenting to our use of these cookies.