The Freshwater Gas Works was established in 1899 at Norton, on the western side of the Yar estuary, to supply gas to Freshwater and Totland.

Coal would have been supplied by barge/ship to a quay adjacent to the works. 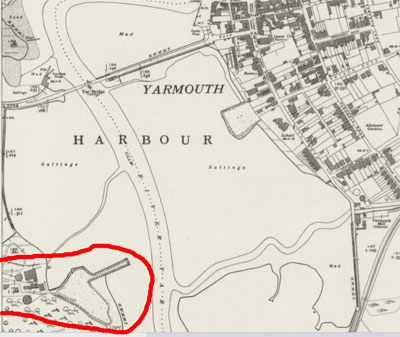 The Gas Works was expanded in the 1940’s with the addition of two further gas holders.

The British Gas Industry was nationalised in 1949 and the private company was wound up in 1950.

Production continued after the central Gas Works open at Kingston in 1957 as a new main had to be laid from Newport, it had closed by 1965.

Today (2019), the site is a boat yard at the end of Gas Works Lane, just off the western side of the Yar swing bridge.

Retrieved from ‘https://www.wightpedia.org.uk/index.php?title=Freshwater_Gas_Works&oldid=2011’
Categories:
Cookies help us deliver our services. By continuing to use this site, you are consenting to our use of these cookies.