Over Christmas 1885, Whitwell, Isle of Wight suffered an outbreak of diphtheria attributed to the drinking of impure water, and the day and Sunday schools had to be closed[1].

A meeting at the Whitwell Schoolroom in February 1886 considered the question of a new water supply for the village, whether the new water supply should be provided by voluntary means or compulsorily by the Rural Sanitary Authority, the latter would have involved the levying of a water-rate[2].

The Whitwell parishioners determined that the new water supply should be provided by voluntary means. The main local landowner behind the scheme was William Spindler[3], of Old Park, Ventnor and his surveyor (and son-in-law), Mr. Theodore Ridley Saunders, was instructed to locate a suitable source of pure water and design a new system - the professional costs being met by Mr. Spindler.

The initial scheme was for the new water supply to come from ‘just below Dean, on Lord Yarborough’s [the Hon. E. Pelham] property’, and the cost was to be £400. Mr. Spindler offered £200 towards the cost on condition that the balance should be raised by subscription from other local landowners.

By the time of a Whitwell Parochial Meeting held in March 1886, the balance had been raised including from ‘.. the poor people [who] had subscribed their five shillings and their half-crowns..’ and the total stood at £405 6s 6d. However, the agent for Lord Yarborough had laid down some conditions for taking the water from his land which the committee considered unacceptable, as did Mr. Spidler who said he would withdraw his offer if the committee were to accept Lord Yarborough’s conditions[4].

Mr. Saunders searched for another source of water and one was found on the land of Mr. Edmund Granville Ward at Berelay (Bierley). At the insistence of Mr. Ward, the lease for the extraction of the water was between him and the Rural Sanitary Authority and was signed in October 1886[5].

On 11th November 1886, the Whitwell Parochial Committee signed a contract with Mr. Harvey of Primrose Bank, Ventnor to undertake the work for £597. Mr. Spindler contributed £100 towards the increased costs, with the balance to be provided by the people of Whitwell[6].

On 13th July 1887, the people of Whitwell celebrated both Queen Victoria’s Golden Jubilee and the opening of their new waterworks. The description of the system records that the source on Mr. Ward’s land not only gave an adequate supply, but was sufficiently high that the whole of the area could be supplied by gravity. Eight ornamental stand-pipes had been supplied, ‘near the church, at Capt. Smith’s corner, opposite the St. Mary’s Cottages, near Mr. Austin Hunt’s, at the chapel corner, at Say Lane, near Mr. Silsbury’s property, and one at Berelay’[7]. 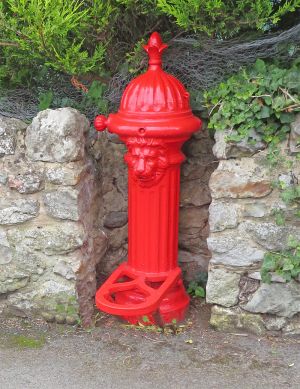 The Whitwell water system was administrated by the Whitwell Water-supply Committee; a report of a meeting of the Isle of Wight Rural District Council records that ‘the local water committee ceased to exist .. when the Council appointed the last parochial committee.’[8]

Retrieved from ‘https://www.wightpedia.org.uk/index.php?title=Whitwell_water_supply_1886&oldid=2578’
Categories:
Cookies help us deliver our services. By continuing to use this site, you are consenting to our use of these cookies.