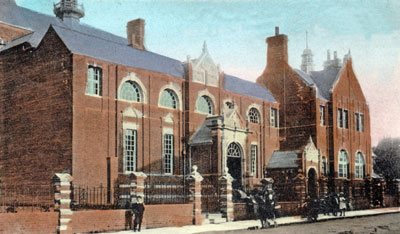 The Technical Institute and Seely Library, in Upper St James' Street, Newport, was built in 1904 on the site of a former nursery.

The library, built with the support of Sir Charles Seely of Brook, became the first public lending library in the country and would, over the coming years, spread across the whole Island.

The Technical Institute was built to provide "technical education" lectures in many subjects, including horticulture. Practical horticulture was practiced in the gardens - now the site of the big playground on Medina Avenue. It also provide evening education for adults.

Since then, the building has been the location various educational establishments (Priory Girls, Nodehill Middle School etc).

Retrieved from ‘https://www.wightpedia.org.uk/index.php?title=Technical_Institute_and_Seely_Library,_Newport&oldid=2429’
Categories:
Cookies help us deliver our services. By continuing to use this site, you are consenting to our use of these cookies.