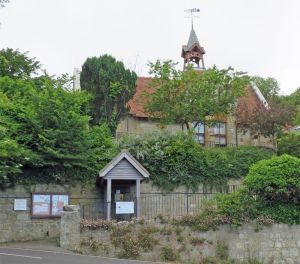 A school is known to have existed at St. Lawrence, Ventnor, Isle of Wight before 1898 when the new school was opened. That earlier school is shown on maps adjacent to and behind, the new school on Seven Sisters Road.

The 1898 Kelly’s Directory records Miss Emily Jane Hitchcock as mistress at St. Lawrence Parochial Schools, supported by voluntary contributions; built for 36 children, average attendance 27 – this would have been the old school.

The Isle of Wight County Press 1 October 1898 records the opening of the new St. Lawrence parochial school with speeches by the Bishop of Guildford and Sir Richard Webster (later Lord Chief Justice and Lord Alverstone). The school was located on the corner of Undercliff Drive and Seven Sisters Road (the northern junction). The Rev. R. W. Odell, rector of St. Lawrence explained that a school had existed in the parish for many years but the character of those premises were such that the school was not eligible for the Government grant. The consequence was that the cost of the school fell on a few private subscribers. To be eligible for a grant, a new school needed to be built. The trustees of the St. Lawrence Estate gave the site and the stone, and a contribution of £100 towards the cost of building the new school.

The newspaper report included the following description of the school: “.. a picturesque little building edifice, erected on high ground at the foot of the hill leading to the Old Church, is built of stone (quarried on the spot), with belfry standing above the centre of the roof.

The schoolroom … is 20ft. by 30ft. and is divided by a movable partition into two class rooms. In addition there is a committee-room, 15ft. by 12ft., clock-room, lavatory, and offices. … erected by Messrs. Ingram and Sons, of Ventnor.”

The 1901 census shows Miss Emily Jane Hitchcock living in the School House as ‘Public Elementary Schoolmistress’ together with her sister, Agnes, ‘Teacher of Private pupils’ and a Pupil Teacher. In 1905 the school was closed by the medical officer of health owing to an outbreak of measles and whooping cough[1].

In 1910, the IW County Education Committee decided, after consulting the School’s managers, to close the school on 31 March 1910 due to the low numbers of pupils[2].

Retrieved from ‘https://www.wightpedia.org.uk/index.php?title=St_Lawrence_Schools&oldid=2526’
Categories:
Cookies help us deliver our services. By continuing to use this site, you are consenting to our use of these cookies.