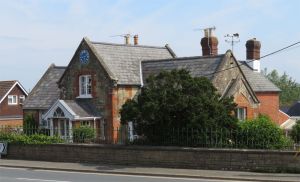 The Rookley School and Schoolhouse in the Isle of Wight were built by John Woodward in 1843, and endowed by him with £20 per annum.

John Woodward was an interesting man; he was born about 1805 in the island and left aged 10 with his father, a bricklayer. John followed his father’s trade and through building houses in Lambeth accumulated a small fortune. In 1843 he retired to Rookley and starting building in Sandown, Niton and other parts. Not only did he build the school for children in Rookley, he contributed to the rebuilding of St. Thomas’s church in Newport, and donated their tower clock and some sculptures. He also contributed funds for the building of the Newport to Sandown railway line[1].

Following the death of John Woodward in 1872, his nephew Richard Woodward became a manager at the school.

By 1898 the Rookley National School endowment had reduced to £14 per annum and there was space for 90 children, the average attendance was 80[2].

In 1906 there were several noteworthy school attendance records across the Island. Mabel Legg at Rookley Elementary School achieved the best record island-wide with nine years’ attendance without any absences and without once being late, in recognition of this achievement Mabel was awarded a silver watch with chain and a silver medal[3].

By 1911 the endowment had further reduced to £6 per annum and there was space for 120 children, the average attendance was 70[4].

In 1937, the school buildings were taken over by the Isle of Wight County Education Committee[5].

The Rookley Primary School was closed in 1958 when there were only 28 children attending and was merged with Chillerton Primary School. The pupils transferred to Chillerton, Godshill and Newport schools[6].

Retrieved from ‘https://www.wightpedia.org.uk/index.php?title=Rookley_School&oldid=2595’
Categories:
Cookies help us deliver our services. By continuing to use this site, you are consenting to our use of these cookies.