The Regal Cinema, with its Art Deco frontage on the High Street, Shanklin, Isle of Wight was opened in 1932. 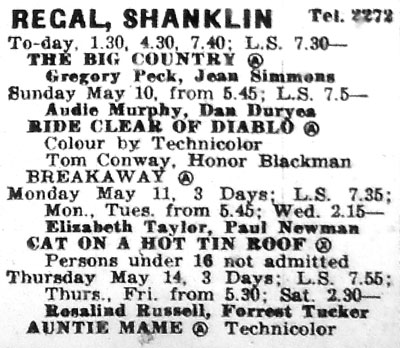 By the late 1930's it was owned by the same company that owned the nearby Playhouse Cinema.

It closed in 1986 and has since been demolished and the site developed as housing with retail at street level.

Retrieved from ‘https://www.wightpedia.org.uk/index.php?title=Regal_(aka_Cannon)_Cinema,_Shanklin&oldid=2727’
Categories:
Cookies help us deliver our services. By continuing to use this site, you are consenting to our use of these cookies.