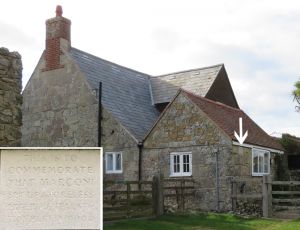 In 1900 Guglielmo Marconi set up an experimental radio system on the southern tip of the Isle of Wight at Knowles Farm, Niton, owned by Mr. Kirkpatrick of Windcliffe. Prior to this, Marconi had been experimenting at the Royal Needles Hotel, Alum Bay.

The mast erected by Marconi was one from the Victorian Royal Yacht Britannia and was so long that some walls had to be dismantled to manoeuvre the mast around sharp corners on the road down to Knowles Farm[1]. The base for the mast used by Marconi remains south of the farm. 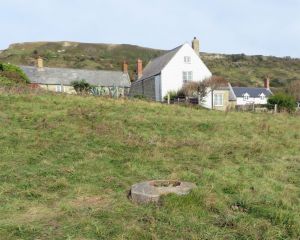 Marconi Aerial base at Knowles Farm

On 23rd January 1901, Marconi successfully transmitted wireless waves to the Lizard in Cornwall from here, some 196 miles. That was twice the distance of any previously recorded transmission.

On the corner of a barn at Knowles Farm, on footpath 39, is a modern memorial to Marconi's presence there: 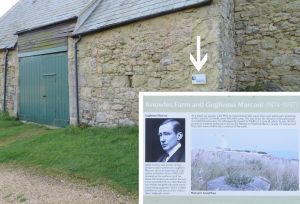 Marconi Memorial, Knowles Farm, Niton
Retrieved from ‘https://www.wightpedia.org.uk/index.php?title=Marconi_Memorial,_Knowles_Farm,_Niton&oldid=2967’
Categories:
Cookies help us deliver our services. By continuing to use this site, you are consenting to our use of these cookies.