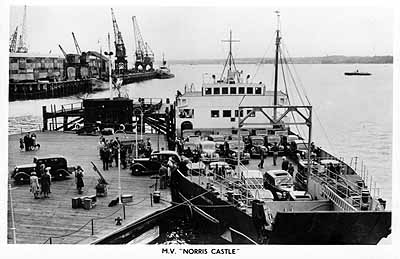 Red Funnel acquired the Motor Vessel Norris Castle in 1949 for the East Cowes/Southampton route. The vessel had been designed originally for the D-Day landings and could be loaded from the bow or from the sides.

She was a relatively slow vessel with a crossing time of some hour and a half, but she did have a larger capacity that most vessels of the time.

Red Funnel disposed of the MV Norris Castle in 1962.

Retrieved from ‘https://www.wightpedia.org.uk/index.php?title=MV_Norris_Castle_(1947-1962)&oldid=1669’
Category:
Cookies help us deliver our services. By continuing to use this site, you are consenting to our use of these cookies.