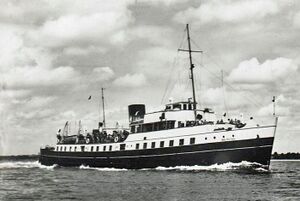 MV Balmoral was a vessel built for, and operated by, Red Funnel on their Cowes Isle of Wight to Southampton route.

Red Funnel ordered the MV Balmoral from Thornycroft & Co. at Woolston to replace vessels lost during WW2. She had capacity for 10 cars on her aft deck and was delivered in 1949. As well as being used on the Southampton/East Cowes/West Cowes route the MV Balmoral also ran excursion trips around the island and along the South coast during summer months.

As larger, dedicated car ferries were introduced on to the route, MV Balmoral was increasingly used just for excursions. When Red Funnel ceased running excursion trips in 1968, the MV Balmoral became surplus and she was sold to P & A Campbell who operated her on their routes in the Bristol Channel until the company ceased trading in 1980.

The vessel was then used, unsuccessfully, as a floating restaurant in Dundee for a time.

In 1986 she was acquired by the operators of the paddle steamer Waverley as a replacement for their previous second vessel, the Prince Ivanhoe, which had sunk in 1981 off the coast of Port Eynon Bay on the Gower Peninsula.

Since 1986 the MV Balmoral has been used for summer excursions around the coast of the UK.

Retrieved from ‘https://www.wightpedia.org.uk/index.php?title=MV_Balmoral_Ferry_(1949-1969)&oldid=2415’
Categories:
Cookies help us deliver our services. By continuing to use this site, you are consenting to our use of these cookies.