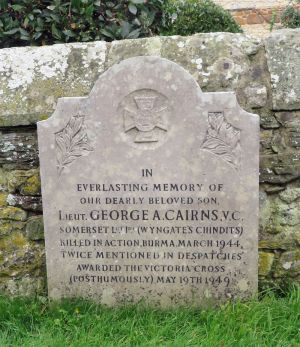 Next to the gate on the north west corner of St. Mary’s churchyard Brighstone, Isle of Wight, stands a memorial to Lieut. George Albert Cairns, V.C.

Lieut. Cairns is buried in the Taukkyan War Cemetery in Myanmar – CWGC record. The memorial in Brighstone churchyard reads:

By 1962 his parents (Albert & Rose Cairns) had retired from Morden, Surrey to Brighstone and, not being able to visit his grave in Myanmar, wished for a local memorial.

The memorial was dedicated on 9th September 1962 by the Bishop of Portsmouth (the Rt. Rev. J. H. L. Phillips), assisted by the Brighstone rector, (Rev. R. H. Charlton.) As well as family members, representatives from a number of local branches of the British Legion, other organisations and the officer commanding the Somerset Light Infantry attended the ceremony[2].

Later the memorial had to be repositioned when the wall was reposition after the line of the road was changed[3].

Retrieved from ‘https://www.wightpedia.org.uk/index.php?title=Lieut._George_Albert_Cairns_V.C.&oldid=2973’
Categories:
Cookies help us deliver our services. By continuing to use this site, you are consenting to our use of these cookies.