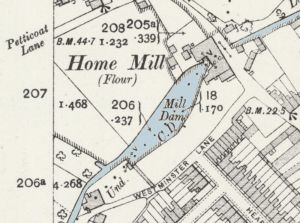 In April 1843, Mr. Francis Pittis held an auction at the Bugle Inn including in one lot,

In 1890, Messrs. Arnell Brothers installed ‘modern’ rolling mill equipment by Messrs. Thomas Robinson and Son, of Rochdale in a new building at Home Mill. It was driven by a compound condensing steam engine and power was conveyed to the rolling mill equipment by shaft and gears. The water power could still be used in conjunction with the steam engine when it was available[3]. (For those interested, the article in the Isle of Wight County Press 26 April 1890 gives very detailed guidance for the operation of the roller milling process.)

Ten years later, 1900, the main shaft, which had driven the roller equipment ‘continuously day and night’ at Messrs. Arnell Brothers’ Home Mill suddenly snapped[4]. However, the broken shaft was ‘promptly put right by Mr. G. Perkins, who utilised a torpedo-boat shaft supplied by Messrs. W. White and Sons of Cowes.’[5]

Street Directories record the occupants of Home Mill as:

In the early 1930’s the mill was acquired by Robertons’ & Hallett’s Dairies, a local firm run by Mr. Britten Harvey. The mill was demolished and a dairy was established on the site to process milk from their dairy farms.

In mid 1930’s a number of local business-men and farmers took over the company and towards the end of WW2, Cow and Gate took an interest in the business and the dairy and farms were separated.[6]

Over the years, the name changed as ownership of the site changed hands/branding – Island Dairies, Unigate. In 2000 Unigate merged with Dairy Crest and four years later the Mill Street operation closed with a loss of 37 jobs[7].

The site was subsequently cleared and developed by McCarthy & Stone and David Wilson Homes Ltd.

Retrieved from ‘https://www.wightpedia.org.uk/index.php?title=Home_Mill,_Newport&oldid=2911’
Categories:
Cookies help us deliver our services. By continuing to use this site, you are consenting to our use of these cookies.