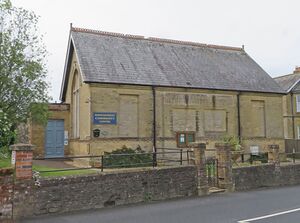 The Havenstreet Board mixed school on the main road through Havenstreet was built by the Ryde School Board in 1896 for 130 children.

Previously St. Peter's Church School in the village had dated from before 1858 and this was handed over to the Ryde School Board in 1895 after it ran into financial difficulties after being run as a voluntary school.

The report of the 1895 Prize Giving explained that previously St. Peter's Church School had been funded with contributions including from the Arreton National School Funds, Lady Oglander, Mr. Garnutt and the Fleming Estate which had all been lost. The school also lost a £20 grant because a new road to Ryde placed Haven Street within two miles of Binstead[1].

By 1911 the school was a Council School under the authority of the Isle of Wight County Education Committee and had an average attendance of 55 - Miss Catherine Matilda Jordan, school-mistress.[2]

In 1951 the school was a County Junior School with Miss K. S. Troughton, head-mistress.

The school closed in 1970 and the building is now used as the Havenstreet Community Centre.

Retrieved from ‘https://www.wightpedia.org.uk/index.php?title=Havenstreet_Schools&oldid=2479’
Categories:
Cookies help us deliver our services. By continuing to use this site, you are consenting to our use of these cookies.