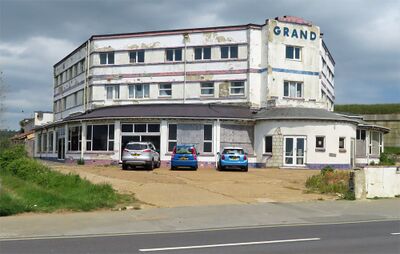 The Grand Hotel of Culver Parade, Sandown, Isle of Wight, was built in 1937 by Mrs. Edith Peach, a local hotelier[1]. It was built in an Art-Deco style with rendered elevations .

It is reputed that there was a control centre associated with the WW2 PLUTO Power Station on Brown's Golf Course, to the south, was located in the basement, however no evidence has been found to prove this.

In 2014 planning permission was given to demolish the hotel and to replace it with a new 30 room hotel on the site to meet the standards required by modern tourists.

Retrieved from ‘https://www.wightpedia.org.uk/index.php?title=Grand_Hotel,_Sandown&oldid=2316’
Categories:
Cookies help us deliver our services. By continuing to use this site, you are consenting to our use of these cookies.