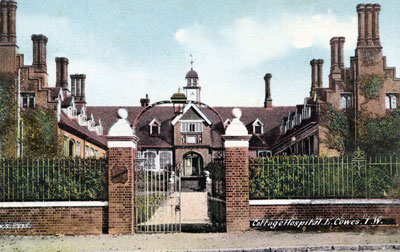 The Frank James Memorial Home, East Cowes, Isle of Wight was opened in about 1893 as a home for aged and disabled seamen and their wives.

It was built by Arthur and William James in memory of their brother Frank James who had been tragically killed in 1890 by a wounded elephant in West Africa. The brothers were the sons of a wealthy Liverpool merchant, Frank kept his yacht, Lancashire Witch, at Cowes.

The two brothers agreed to this suggestion and Frank James Hospital opened in 1903. Over the years, a large amount of the funding came from the local community, especially the employees of J Samuel White & Co.

With the coming of the National Heath Service in 1948, management transferred from the local committee to the Management Group covering most of the Island Hospitals.

By 2002 the hospital had been closed and the property (Grade 2) sold off by the Isle of Wight NHS Trust.

Retrieved from ‘https://www.wightpedia.org.uk/index.php?title=Frank_James_Memorial_Home_(Hospital),_East_Cowes&oldid=2660’
Categories:
Cookies help us deliver our services. By continuing to use this site, you are consenting to our use of these cookies.