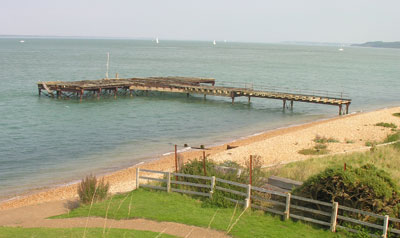 The fort and pier were ideally located to aid following the collision between HMS Gladiator and the American liner 'St Paul' in 1908.

Between the World Wars there were plans to operate a passenger service between the pier and Keyhaven, but this never materialised.

It was used throughout the operational life of Fort Victoria largely for just military use, often just for training.

Retrieved from ‘https://www.wightpedia.org.uk/index.php?title=Fort_Victoria_pier&oldid=1914’
Categories:
Cookies help us deliver our services. By continuing to use this site, you are consenting to our use of these cookies.