A new lifeboat, the 'Worcester Cadet' - the gift of the cadets of the Royal Naval training ship, Worcester - was introduced in 1880.

In 1888, 2 crewmen and 2 rescued men lost their lives when the Brighstone Lifeboat 'Worcester Cadet' capsized while rescuing lives from the wreak of the 'Sirenia'.

In 1907 the station received a new lifeboat, the 'Brothers Brickwood', which was a gift to the RNLI by Mr. E. D. Brickwood, of Boscombe, Bournemouth. She superseded the 'Joe Jarman' which had been stationed at Brighstone for 14 years. The new lifeboat was of a self-righting type with length of 35 foot and a 8 foot 6 inch width[3].

The station closed in 1915 with the introduction of a motor lifeboat at the Totland station.

Brighstone Church contains three panels in respect of the lifeboat: 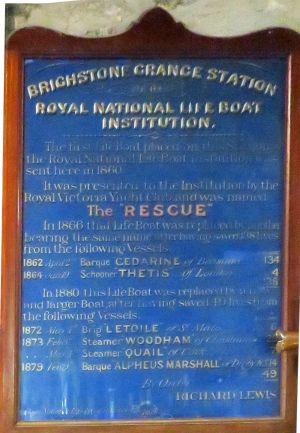 Early rescues of Brighstone Lifeboat
Retrieved from ‘https://www.wightpedia.org.uk/index.php?title=Brighstone_Lifeboat&oldid=2834’
Categories:
Cookies help us deliver our services. By continuing to use this site, you are consenting to our use of these cookies.