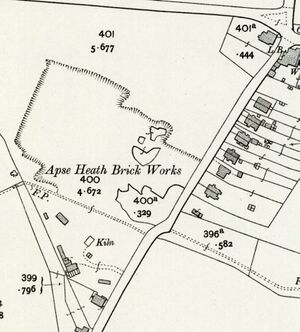 Apse Heath Brick Works, on the Ventnor Road between Apse Heath crossroads and Whiteley Bank, on the Isle of Wight.

The 1898 Kelly's Directory has the brickmaker as John Mew & Son, and the 1911 directory as just John Mew.

In 1938 the works were advertising for a Horse 'suitable for pug mill.'[1]

The Apse Heath Brick Company merged with the Gunville Brick and Tile Company in 1940, shortly before the death of Ernest John Mew[2].

By 1971 the pond was known as 'Gear Gap pond' and had been stocked with freshwater fish for local anglers.

Retrieved from ‘https://www.wightpedia.org.uk/index.php?title=Apse_Heath_Brick_Works&oldid=2377’
Categories:
Cookies help us deliver our services. By continuing to use this site, you are consenting to our use of these cookies.