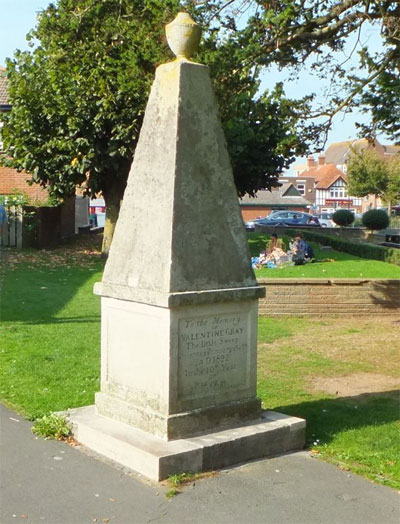 Valentine Gray, the little sweep, memorial
In 1822 a nine year old boy, Valentine Gray, who was one of the many chimney climbing boys, was found dead in the filthy outhouse where he had been forced to sleep in one of the numerous slum alleys radiating off Pyle Street in Newport.
A medical examination showed that his body was covered with bruises and at his inquest, his death was reported as due to ‘a severe blow or blows to the head’ - the verdict was "Manslaughter against Davis (his master) and his wife." Benjamin and Margaret Davis stood trial at the Lent Assizes 1822 at Winchester - Davis was found guilty and sentenced to one year's imprisonment; his wife was acquitted.
Valentine had been born into a poor family in Alverstoke in Hampshire and Benjamin Davis had taken him out of the Poor House there in October 1821 to be an apprentice Sweep.
Both the local and national press extensively reported the inquest and subsequent trial and these aroused much public anger both locally and also across the whole country that children of his age, or even younger, could be treated so badly. It added to the already growing movement for new and effective legislation to protect youngsters in factories and elsewhere.
Here on the Island, compassion, (or possibly a sense of guilt and shame), led to the erection of a memorial by public subscription in Church Litten, the burial ground for the parish church of St Thomas’, Newport.

The memorial still stands there.