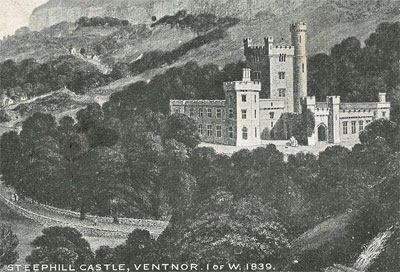 Steephill Castle - 1839
The grounds for Steephill were laid out in 1762, and a thatched cottage residence built in 1764 by Hans Stanley, a British diplomat and politician who, at that time was Governor of the Isle of Wight. He died in 1780 and the estate was purchased by the Hon. Wilbraham Tollemache, another politician and later 6th Earl of Dysart.

On the death of the Earl in 1821, the property passed to his sister, Lady Louisa Manners, who sold it to John Hambrough, a Hampshire Gentleman. He had previously been living at Farringford House, Freshwater but had wanted to build his own property and Steephill gave him the opportunity with building Steephill Castle. 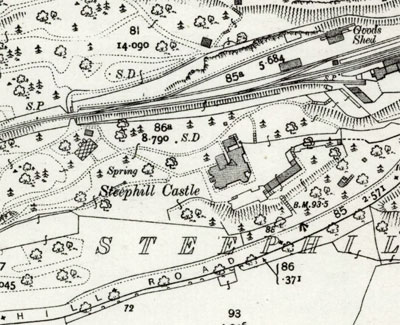 The castle, not a defensive castle but a country house with towers, turrets and extensive crenellations etc, was erected in 1833 at a cost of £250,000, the architect being Mr. James Sanderson. John Hambrough was a great benefactor to Ventnor; he contributed to the building of St Catherine’s Church and the National Schools in Albert Street; and his name is remembered with Hambrough Road. Both John and Sophia, his wife, died at their London home, Princes Gardens, in February 1863; the remains of both were brought back to Ventnor for burial in St Catherine’s Church.

Cira 1887 to 1898, the castle was occupied by Henry Sewell, a Jamaica gentleman, who occupied it when 'on this side of the Atlantic.' In 1892 the Newport, Godshill, and St. Lawrence Railway Bill was before a Select Committee of the House of Commons, this included a proposal to build a railway station next to the castle. Mr. Sewell objected to the Bill saying that he had purchased the Steephill estate 'for its quietness and repose.' The field for the proposed station had been purchased from the previous owner, Mr. Hambrough. The Bill passed and the line as far as St. Lawrence opened in July 1897. However the railway company needed some of the Steephill Castle land to bring the line into Ventnor.

In December 1898, the estate was purchased by Mr. Charles Mortimer, J.P., of Holmwood Surrey, a director of the railway company. He immediately sold sufficient land as necessary to the railway company for the extension into Ventnor proper to be built.

The castle passed into the hands of Mr. John Morgan Richards, an American businessman who purchased it in 1902. Previous to the purchase, Mr. Richards had taken the property for the summers of 1900 and 1901. His daughter, the novelist Mrs. Pearl Mary Teresa Craigie (aka, John Oliver Hobbes) did a considerable amount of writing at the castle.

On the death of John Morgan Richards in 1918, the Steephill Castle estate was auctioned and was acquired by Sir Thomas Brooke-Hitching (British businessman and Conservative politician), Sir Thomas died in 1926.

Probably at this time, Steephill Castle was acquired by the Friendship Holidays Association (FHA) to provide holidays based on communal and co-operative principles. FHA holidays followed a standard format with a weekly programme of led walks and excursions, and communal evening entertainment organised by the host and hostess. FHA ran Steephill Castle until 1959. For a period in WW2 the castle was used as a school when holidays on the Island were not allowed.

By 1959, the upkeep, lack of modern conveniences and fire safety issues etc had made Steephill Castle unsuitable for modern use.

By 1963 the site had become derelict and the grounds completely overgrown. Permission to demolish the castle and develop 29 dwellings on the site had been obtained and in July 1963, demolition and clearing the site was started by D. A. Stotesbury and Son, local builders; they had previously developed the railway station site which became available after the railway closed in 1952.