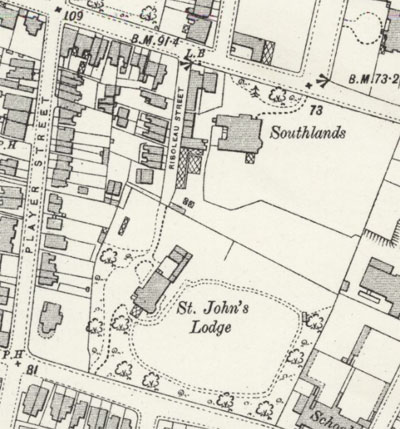 St Johns Lodge, 1907 map
Not one of the main island houses, but this Ryde site has an 'interesting' history.

St John’s Lodge was built for Admiral Peter Ribouleau in 1830 as his ‘country house’. The main entrance was in St. John’s Road Ryde, Riboleau Street (named after the admiral), appears to have been the ‘tradesmen’s entrance’ from Star Street (2021, Park Road). Admiral Ribouleau died in Ryde in 1847 and his burial is recorded at St. Thomas’ Church, Ryde.

Following the death of a Mrs Barrow in 1908, St John’s Lodge ‘standing in beautiful pleasure grounds, in all about two and a half acres’ was put on sale by auction. The property did not sell at the auction but was later sold to Messrs. Wheeler. Bros., (builders, of Ryde) – IW Observer 1 August 1908.

Wheelers’ appear to have demolished the Lodge, developed the north side of St. John’s Road, extended Riboleau Street through to St. John’s Road and built an Italian classical style residence on the east side of it. A later newspaper report records that ‘The house was built in 1912 for Miss Emily Du Pre, a rich eccentric, at a cost of £28,000. Miss Du Pre, who belonged to the Catholic Apostolic Church, had a small chapel built in the grounds.’ 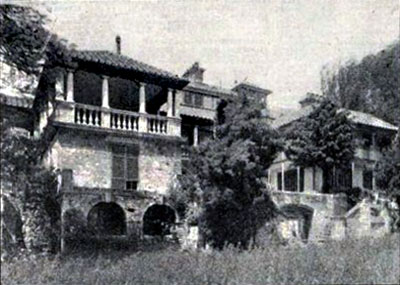 The Gates of St John

In 1923, the Evening News referred to it as ‘The Gates of St. John Home, the home of rest for clergy..’, generously financed for the past two years by Miss Du Pre. 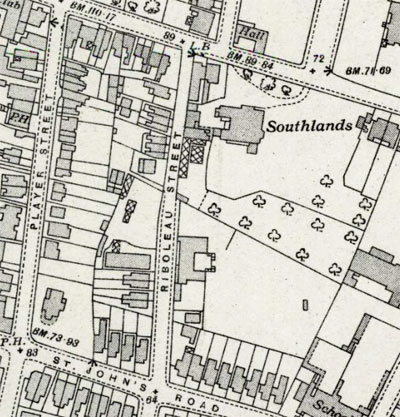 The Gates of St John

Miss Du Pre died in 1924 and the house was put to auction, described as ‘in all about one-and-a-quarter Acres’ with a gardener’s cottage.

In 1928 the property was bought by Sidney Hartnoll Beard, he died in 1938 and left it to his son-in-law and daughter, Mr. and Mrs. Stanley Lock. By 1948 Mrs. Lock was a widow and decided to have the house dismantled and rebuilt on her 14-acre estate Tullimaar, Perranarworthal, near Truro, Cornwall. The house was dismantled piece by piece, each numbered and recorded, then it was all transported to Cornwall. However the house was never rebuilt and Mrs. Lock died in 1958. The parts, which were remained on the Cornish estate, were eventually sold off in the 1980’s.